As Jonathan Safran Foer eloquently puts it “Food is not rational. Food is culture, habit, craving and identity.”

Cultural cuisines are in a way, time capsules. Traditional dishes are shaped by a long history of events and appropriated to its country’s ever changing social and geographical circumstances. Food is a significant factor in the complex and intricate backstory of what is our present. You can literally take a spoon, fork, chopstick, swig of culture in any country you visit. That being said, I do enjoy composing an itinerary guided by a list of dishes special to my destination. As much as it is delightful to eat food, it’s just as wonderful to know how and who made it. It’s a pretty terrific tool to utilize when you want to get to know the personalities that make up the foreign environment you’re visiting.

And so, here’s getting to know Barcelona in three courses:

While studying abroad in England, I had the opportunity to filter through the diverse cultures that clump together to form Europe. The Spanish scene is amongst my favourites with its lively people and vibrant atmosphere. Relative to England, Barcelona is warm all year round. It’s Mediterranean climate gives it a comfortable average of 17°C in mid Spring, a very inviting and relieving pair of digits when you’re not one that can handle the cold very well. When England’s indecisive – close to bipolar – spring climate averages at −0.6 to 5.8 °C (an estimation that illustrates that the UK cold is a comedian) and enjoys hiding around the corner to jump-scare hopeful and unsuspecting kids with a loud “boo!”- you know it’s time for an easter escape vacay.

We left our long johns behind, embarked on an early morning train ride to Heathrow, followed by a short flight, and said hello to the Mediterranean warmth. As soon as our bags dropped onto the floor of our cosy Spanish flat, it was onto addressing the first thing on day one’s agenda. Lunch. 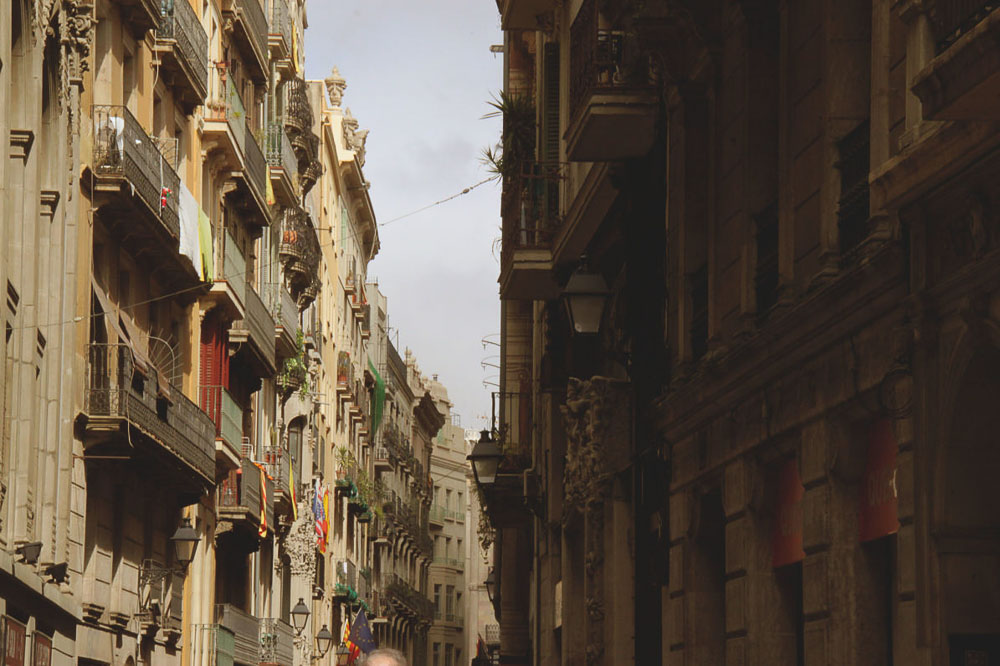 Our accommodation was conveniently situated along the La Barceloneta stretch, a neighbourhood which borders the Mediterranean sea. The stretch is lined with a gradient consisting of the refreshing blue ocean water, picturesque sandy beach, pedestrian pavement where bikes can be rented, and bustling bars and restaurants; an incredible place that accommodates  the different tastes in leisurely activities.

While walking up and down a concentration of restaurants, we eyed the food they were serving and carefully compared the prices offered by the different establishments. It became evident that the spaniards take pride in their seafood, and I guess that’s expected when you acknowledge that the country is surrounded on three sides by the ocean – the Atlantic Ocean to the west, and the Mediterranean Sea to the south and east. 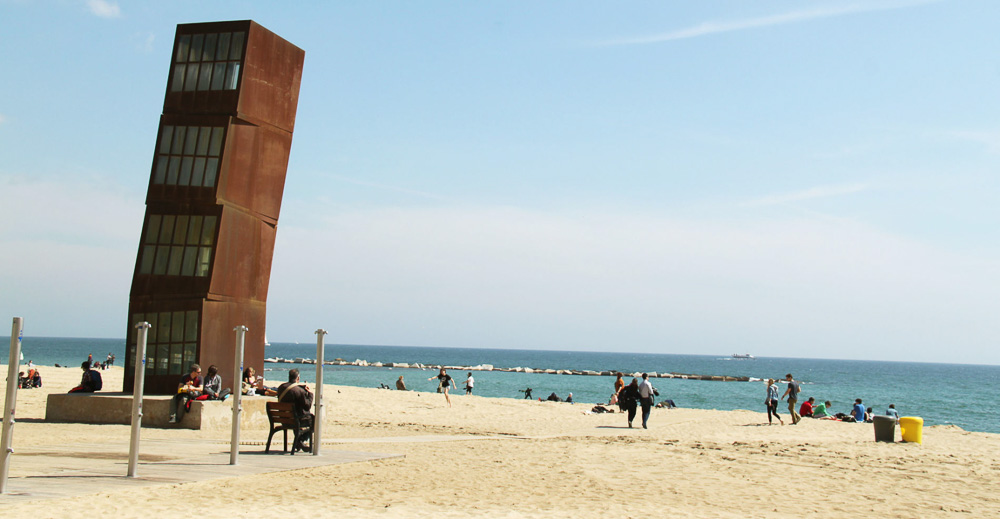 Finally giving into hunger, we settled with a restaurant and our welcoming waiter jotted down four seafood paellas to order. Paella is a rich rice dish that is widely celebrated as Spain’s national dish. It is served in a heated cast iron pan and looks like a frenzy of colours and flavours that is difficult to resist getting in on. Did I mention that it smells great too?

Like us, it is typical for first timers in Spain to believe that a hot pan of paella was intended to be shared between two, as the word ‘whopper’ came to mind when we were visually processing the portion of a single paella serving. But you will be politely corrected that there is a one serving per person rule, our assimilation into the Spanish culture began at that point. Needless to say, four challenges were served to our table and we were stuffed by the end of our meal. 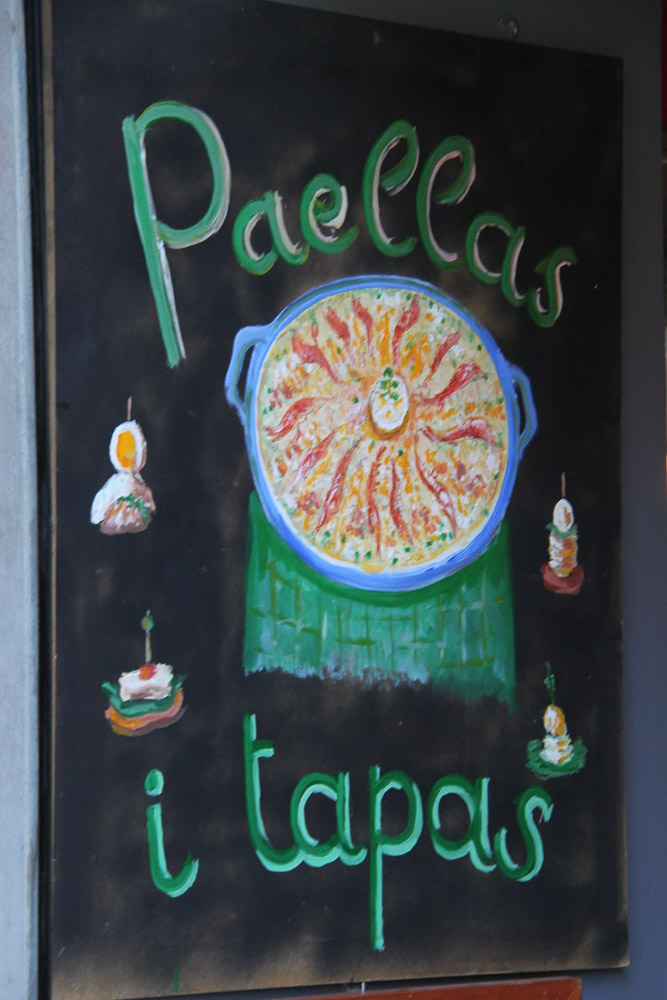 We had four days and three nights in which we spent lazily weaving through the urban scene in Barcelona. Our exploration for the first two days revolved mainly around the Gothic Quarter (Barri Gòtic), the oldest part of Barcelona where you can find some of the oldest buildings — many of these structures had been erected during the medieval times, and some are impressive relics from as far back as the Roman settlement of Barcelona.

It is quite a dramatic scene as you amble through the city in a labyrinth of beautiful narrow streets paved with aged cobblestones, and at night — dimly lit by gothic lamps that radiate warm yellow tones. Definitely a great place for all those who are simultaneously wanderlusters/ history geeks. 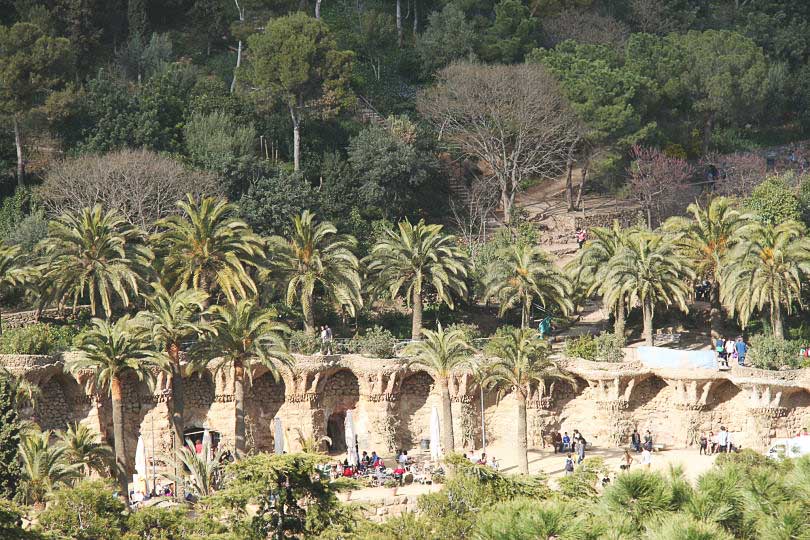 The city is well connected and metros are conveniently built, it was easy to venture out to visit other suggested attractions and the several UNESCO world heritage sites that are Barcelona’s pride and joy. Some of the most jaw dropping architectures built during the Art Nouveau movement  – a movement that exuded the principle that art should be a way of life – can be spotted throughout the city, but the most notorious and celebrated structures are claimed by the late architect Antonio Gaudi. His legacy has drawn many people to visit Barcelona, and as we hopped from one Gaudi building to another, there was no question why. When in the presence of his tasteful and organic designs, one can’t help but to playfully appreciate the nature and beauty of liberated life. They are genuinely beautiful and even if you weren’t in knowledge of Gaudi, you’d take a second glance while passing by. 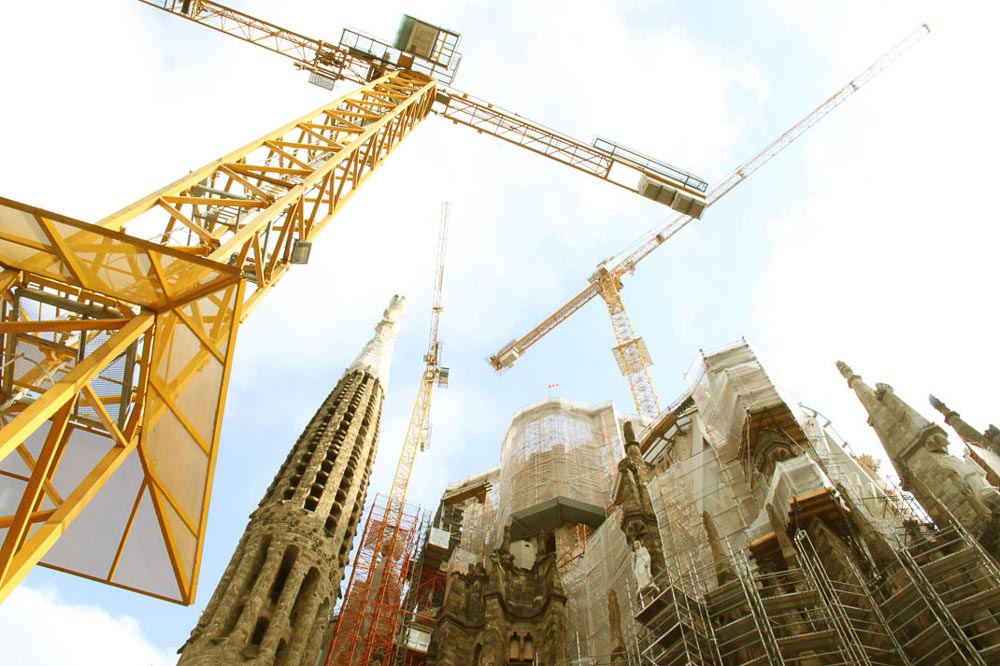 So, a lot of walking was done and the game plan to counter the tummy grumbles was simple: Tapas, the dim-sum of Spain.

It’s been said that  during the reign of King Alfonso, the king himself made a long trip and had stopped to rest in the town of Ventorillo del Chato in the southern province of Cádiz. He ordered a glass of sherry, because of a gusty wind the inn keeper served the glass with a slice of ham resting on the circumference of the rim. This was initially done to prevent dirt from getting into the drink, but the king liked it so much that he requested his second order of sherry to come with the “tapa” — which when translated, means “cover”.

Presently served as appetizers, snacks, finger food; tapas comes in small portions and usually in clay dishes when they are ordered off the menu, Alternatively, some bars and cafes display them on the counter in a buffet style, and customers pick and mix as if from a savoury candy booth — the bill is calculated by the pieces.

It was definitely an ideal food option to keep us fuelled throughout the day, and to the spaniards they serve the same purpose. As the usual dinner time in Spain is between 9pm-11pm, tapas is socially enjoyed as a work-up to the main meal, hence it is common practice to bar hop with friends prior to dinner. 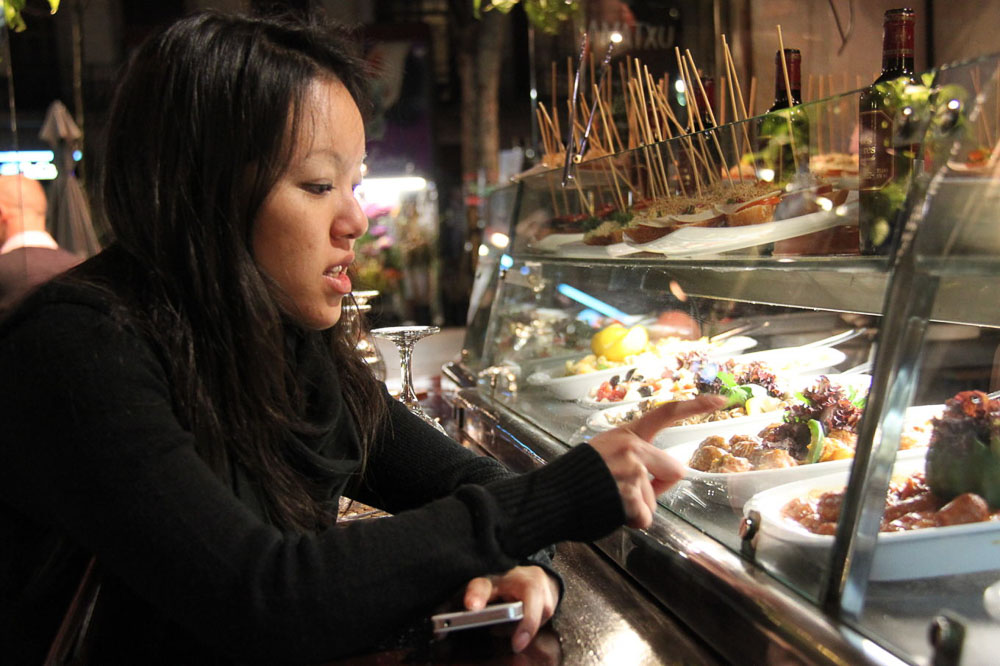 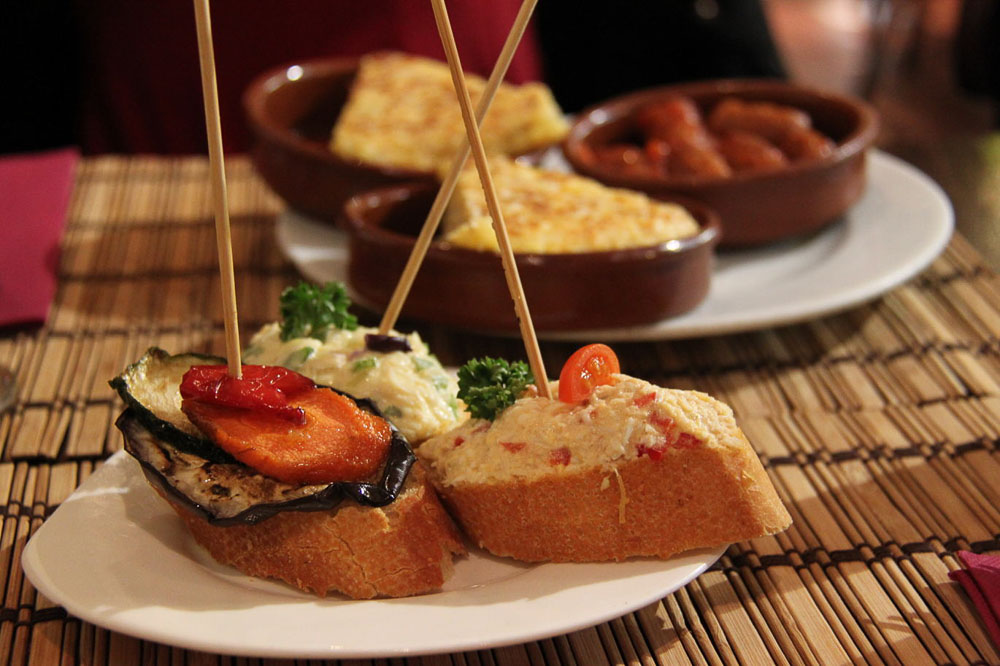 What is worth your enthusiasm is the fact that tapas comes in a large variety; ranging from cold to hot dishes. They can be in the form of skewed anchovies, olives and cheese, a complimenting pair of ham on bread, or a hot plate of drool-worthy potato omelette. It was a delight that tapas bars were easy to find — we were walking past one every few metres and  nearly each one spoiled us with their colourful, mouthwatering display. Here’s a tip: always purchase the most exotic looking ones, they are a bunch of fun to eat. 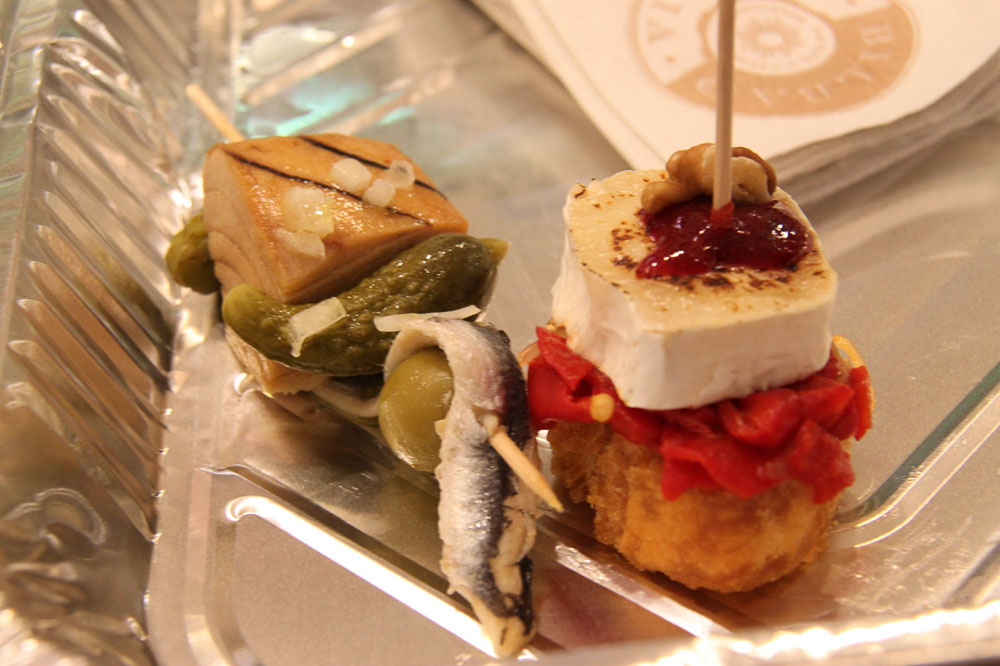 Summer afternoons in Spain can get pretty warm, and a glass of chilled sangria is no doubt the best way to compliment the heat. Just imagine this: 28ºC on a sunny day, and in your view are wide horizontal strokes of blue that are distinctly the sky and ocean, natural light is reflecting off the beach of warm, soft, fine sand, and you can feel the well travelled Mediterranean breeze ruffling through your hair.

In your hand, is a glass – wet from condensation – of cold red wine infused with the fresh flavours of chopped fruits, and a hint of brandy. As you swerve it in your hand, you hear the ice cubes clinking the sides of the wine glass. It is sweet and refreshing, you take your first sip, and it is inevitable that you let out a relieving whisper of “ahhh”— like in pepsi adverts. Pretty ideal isn’t it? 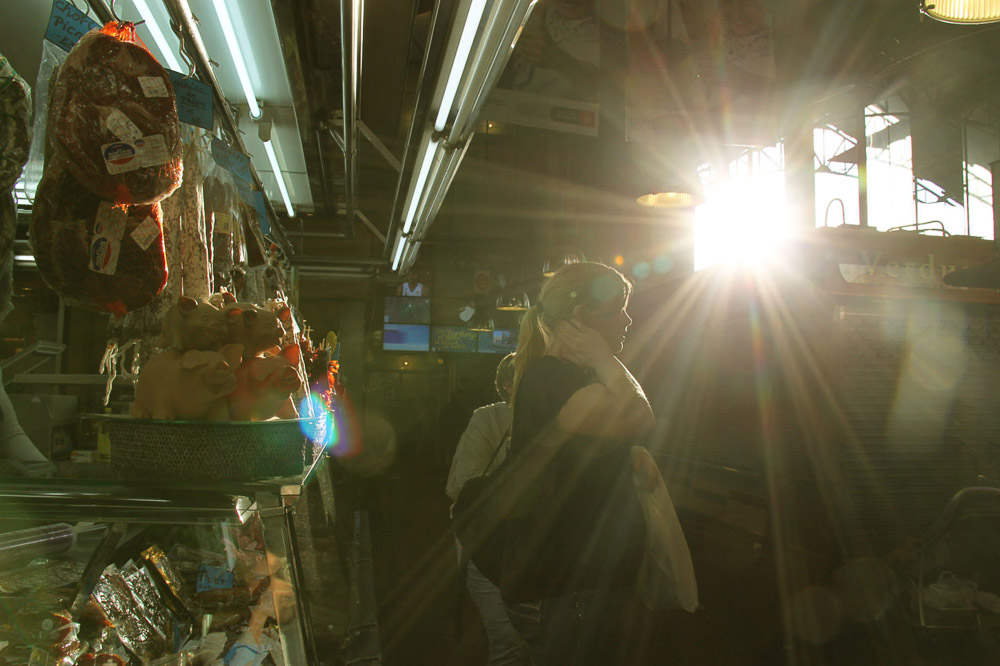 However, this first trip of mine to Barcelona was not during summer, as i’ve mentioned— it was Spring, but it didn’t make a glass of sangria any less enjoyable! In fact it helped exemplify that a glass of sangria is suitable for all seasons! What I mean is that sangria coordinates well with the Spanish environment all year round.

Our first glass was ordered on the last night of our stay, and there really wasn’t a better way to wrap up the trip. We had wandered into a quaint little tapas bar for dinner just after a stroll around La Rambla. It had been a long day of itinerary chasing and we were tired, but at the same time satisfied with all that we had managed to do within four days. By this leg of the trip, our group had  dwindled down to just the pair of us and I was with a childhood friend who shared the same enthusiasm about food. 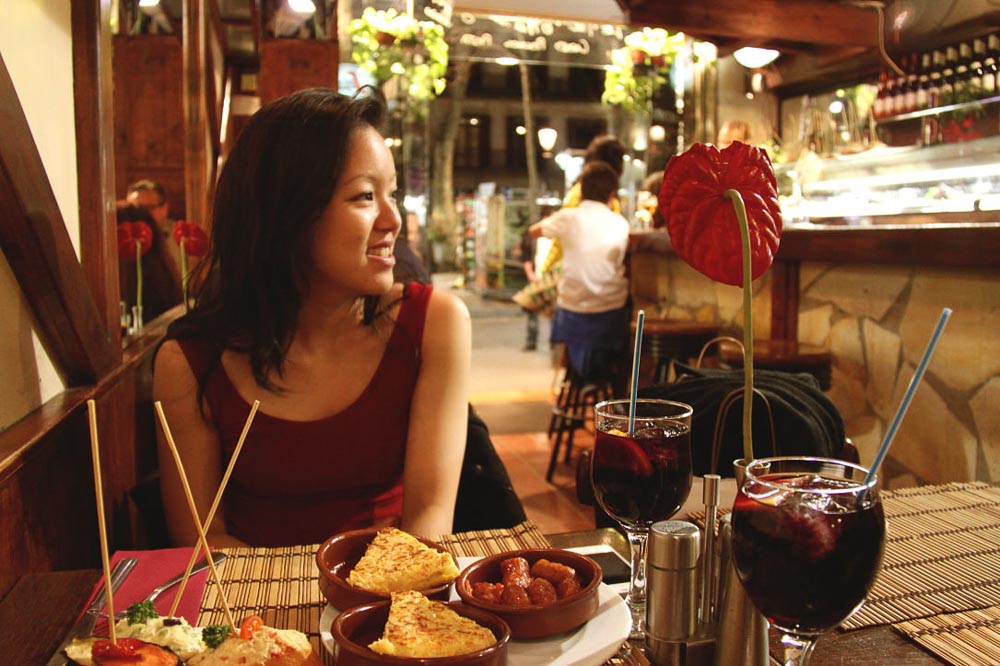 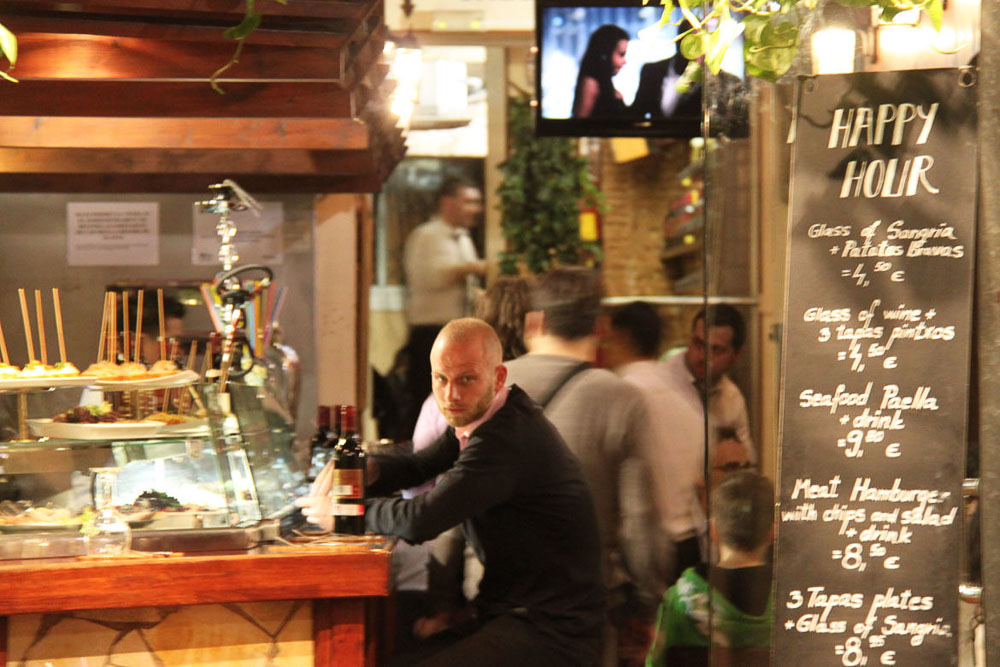 As we sat in the bar in comfortable silence, we were reflecting and soaking up all that the environment had to offer; the sound of laughter and Spanish conversations surrounded us, the view of people passing by on the street from our small enclave, and the delightful smell of dinnertime in the air. Barcelona had been such a wonderful trip and it’s laid-back lifestyle, warm personalities and inspiring energy was just what we needed to resume university’s next semester. We felt well equipped with a new perspective, and with the clink of our glasses filled with sangria, we celebrated it. 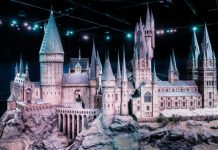 12 Unique SRV-Eligible Experiences That Are Friendly on the Wallet

I Tore My ACL While Travelling and Travel Insurance Saved Me...

Cycling in Penang: How to cover Georgetown’s top attractions in one...