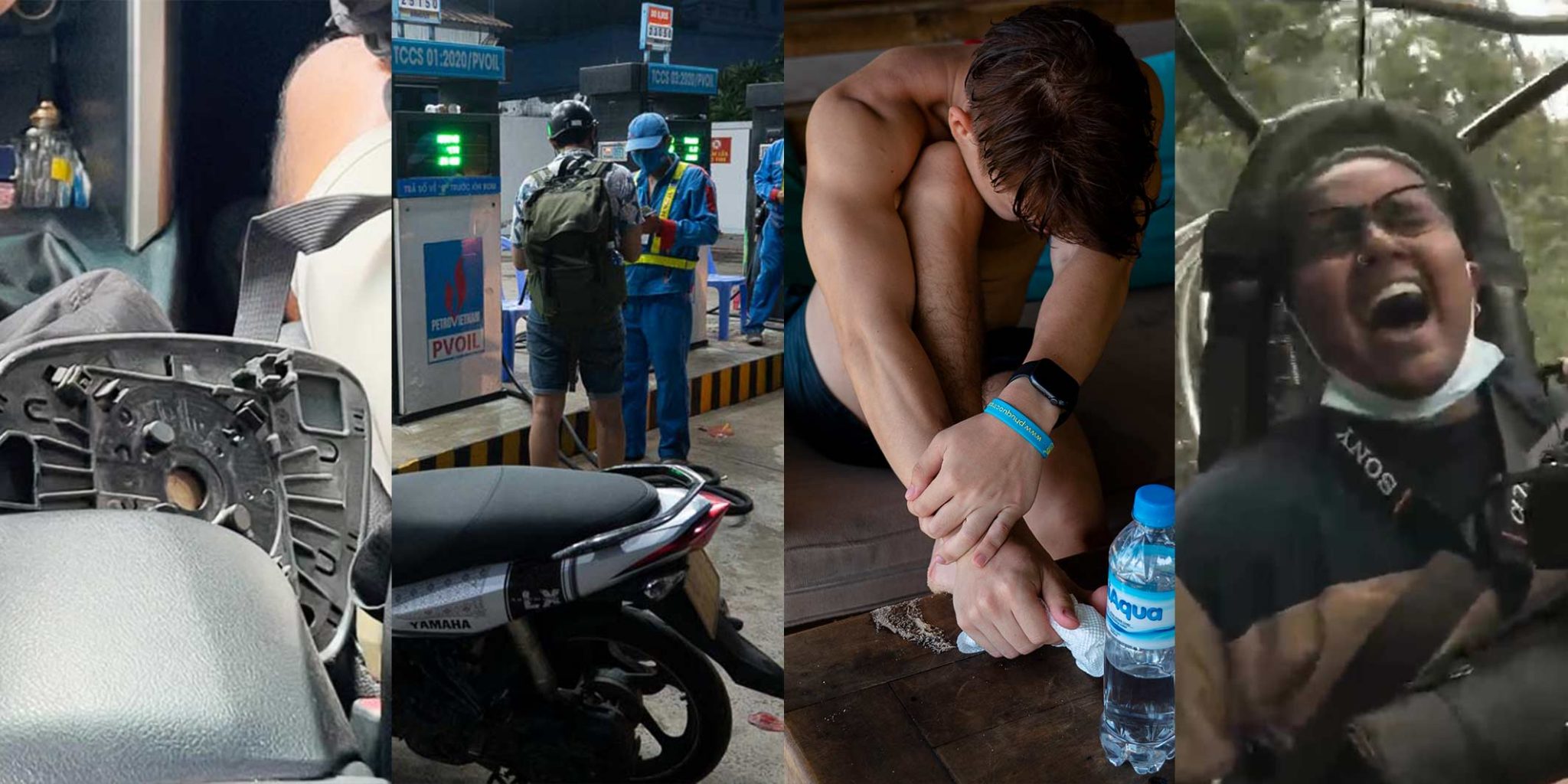 The TTI Bootcamp can be summarised as a rite of passage. It’s the only trip where we get to travel as a whole company, and put our newly learnt content skills to the test.

The brief this time — we’d be split into four teams to cover four different cities:

We finally got to meet our Filipino team for the first time — after 2 weeks of hearing their voices on Discord and stalking their Instagram profiles, we had our grand reunion at Ho Chi Minh Airport!

As Murphy’s law simply states, “Anything that can go wrong will go wrong.”

To running out of fuel.

To losing a part of you (literally).

We’ll never know what happens during our travels so as they say, just sit back and embrace the journey ahead.

Starting the Trip with a Bang (Literally)

As Team Ho Chi Minh (HCM) arrived at the airport, they booked a seven-seater car to their accommodation. However, when the driver arrived, he immediately started shaking his head as he greeted them with a “NO” before explaining that there was not enough space for all of them.

After involving the police to help translate and explain to the driver, they were off with a grumpy, sassy driver. As the ride progressed…

The mirror fell out after colliding with an oncoming pedestrian. Shocked by the accident, what’s even more shocking was when the driver simply shrugged it off and chuckled, “hehe my friend”. The poor pedestrian simply got up and continued making his way as if it was an everyday thing!

What’s so special you might ask. A couple used to own a Banh Mi shop named Banh Mi Huynh Hoa which is a tourist’s favourite.

Team HCM managed to get their hands on the local’s favourite (Banh Mi Ba Hyunh) and they collectively agreed it was the BEST Banh Mi they’d ever tasted.

Lesson learnt, when it comes to food, ask the locals!

This is Trini. Trini is smart. Trini knows she needs a lot of sleep for all that’s to come.

“Nhanh lên (hurry up)!”, the bus driver shouted angrily as Team Mui Ne made their way to the bus. Little did they know starting their trip with a scolding from the bus driver was the least of their troubles.

First up, the team tried to rent motorbikes to explore the city but when they told the cab driver where to go, they ended up at shady-looking places with not many options (see above pic).

Trini shared that she was pretty freaked out in the cab because he refused to take them to a proper bike rental place. In the end, they dropped off at a less shady-looking place and managed to rent a bike at a cheap rate.

After somewhat successfully riding their motorbikes into the sunset… hold up. Where are Yancy and Jerico? As Uncle Pohts (aka Hendric/bossman) looked back, their bike was nowhere to be seen. Turns out, they ran out of fuel.

Thankfully Uncle Pohts was able to stash some fuel in a bottle from the nearest petrol station before driving back to meet them. Uncle Pohts saves the day!

Not the best day, but at the very least everyone made it back in one piece.

4AM in the morning and tired as f**k ready to capture the first daybreak, Team Mui Ne was at the hotel lobby, dreading excited to head out! One teenie weenie problem, where is the driver?

Uncle Pohts trying to get to the driver

After the mysterious disappearance of the driver, Uncle Pohts started calling him, and here is a compilation of excuses given (for your future reference):

“I’ve picked the wrong passenger, I’m coming back now” – 30mins later and nowhere to be seen.

As the first rays of the day lit their beautiful hotel lobby instead of the sand dunes. The team was in shambles as we can tell from Yancy getting in some push-ups to hopefully appease his disappointment.

A notification sounded on Uncle Poht’s phone and turns out, the driver actually forgot about them. Exquisite.

Leaving Nothing but Footprints… and a Toenail

Clyde and Richie (me) doing the Sun Dance

Believe it or not, it worked wonders. The Phu Quoc weather forecast was filled with rainy days that week, but after a gloomy mornng, we were met with clear blue skies for the rest of the day — thanks to us “channelling the sun”?

Looking at the slides, Clyde confidently uttered his last words in front of the camera, “easy”.

As we ascended the stairs to one of the steepest slides in the park, we turned back to notice… we were missing a certain individual. We later found our dear “easy” boi looking a little wonky.

Even with some persuasion, it was a shame that “easy” boi wasn’t ready for so instead, me and Cherz (being the daredevils we were), went for it!

Fun fact: After existing for 22 years, this was actually my first time at a water park! I did not expect to have this much fun with all the water rides and would definitely be up for another round.

Richie and Cherz as the trap door opened

Seeing his fear of slides, we decided to do some with the floats to give him support. With an action camera strapped onto me directly facing him, we knew we were in for a treat — a collection of meme-worthy expressions that will live in our database and his legacy forever.

Question: What did the ocean say to Blee?

Nothing. It just waved… and took his toenail along.

On the second day, team Phu Quoc went island-hopping. As we were filming a drone shot of Blee running into the waters from the coast, we suddenly saw him trip over and fall face flat into the serene waves of Mui Rut Island.

Blee running into the sea for the drone shot

Not gonna lie, I thought he would be fine until I noticed the amount of blood oozing from his toe from a distance.

On closer inspection, we realised his toenail had completely come off. Poor Blee 🙁

After a trip to the hospital, the doctor sat him down and took out his tools to dress his toe. To my surprise, Blee, while panicking, exclaimed, “Quick Cherz, help me film my reaction!” as he hurriedly took out his iPhone to timelapse his treatment.

A true content creator he was — I saluted him in my mind before his screams of pain echoed through my ears while shooting more B-roll (footage) of his plight.

If there’s anything you should take away from this story, please be careful and buy travel insurance.

Least of Troubles in The City of Flowers

When I was talking to team Da Lat in hopes of some juicy bits, I was told it was a (mostly) smooth sailing journey.

I mean it’s not like I needed some tea or anything to laugh and make fun of spill for my dear readers.

So instead, here are some fun stuff that happened.

Their trip started with a solemn realisation that their accommodation, Crazy House, was a little creepier than they expected. With mirrors plastered all over their beds, little termite structures, and a cramped space, they were in for an exciting night.

Being a tourist attraction, the lights outside were left on 24/7. I hope at the very least, nothing starts moving in the mirrors.

Team Da Lat’s first activity was an alpine coaster — and if this does not spell trouble, I don’t know what does. As they boarded the carts, the instruction was simple — push down the handle to accelerate, and pull up to break. Guess how that turned out?

Frantically pushing the handle downwards, Kav hoped to slow the ride down, however to our surprise, not only was she increasing the speed of the coaster, but the intensity of her screams.

Poor Shai had to experience this along with the perpetrator as their shrieks echoed through the forest.

On their second day at Lang Biang Mountain, they strapped on their seatbelts and were ready to roll. The ride was hella bumpy and it was then Celeste came to a realisation…

Our dear princess started complaining about how bumpy and painful their ride was and felt her head spinning. Luckily, they had some motion sickness pills with them, so remember kids, pack your medication!

On their last day, they got up at 4AM to catch the beautiful sunrise from the lake. That’s cute, at least their tour guide came.

But look at this breathtaking view…

“Ey, so this lake is freshwater or seawater ah?” Celeste asked. With that simple question, team Dalat started the taste test and was back to their usual clownery.

“I saw a dead fish just now”, Shai replied after everyone tasted the lake.

Chiong Party is also known as the overnight rite of passage for The Travel Intern members to finish their assigned articles and videos. After travelling intensely to amass out some sick contentz, now we had to speedrun and (supposedly) finish our deliverables and present them in less than 24 hours.

Flying back from Phu Quoc to HCM, I was exhausted and hungry (Team Phu Quoc had yet to find dinner), not to mention, we were the last group to arrive, giving others a headstart.

After a quick shower, dinner, and briefing, the “party” begins.

I had no idea about the disasters that await my friends and me.

I really love this bratty laptop, acting up especially in my most DIRE moments.

Halfway through the frantic journey of churning out my article, WordPress crashed and 2 hours of my work vanished along with my sanity. I then opened Lightroom for a change of pace…

“Your hard disk has not enough space”

Exhausted, I guiltily plopped myself on the bed for a quick nap to refresh my sanity since my laptop couldn’t.

Other cockups happened amongst us, including more laptops crashing, the Adobe Suite being dysfunctional sometimes and of course, people falling sick. Despite that, the entire TTI was helping each other, checking up, buying breakfast, and just making the process much more bearable.

After presenting our work the next morning, our bootcamp came to a close. With everything on Uncle Poht’s tab (Thanks Bossman!), we ended the trip spoiling ourselves after that helluva night.

To singing our lungs out and deafening ourselves.

Everyone definitely gained (or lost) something valuable. The beauty of travel is that everyone feels a lot closer simply because we’ve adventured and lived together.

Was it what I expected? No.

How did I feel at that moment? Tired but fulfilled.

Because in retrospect, it was all fun in the end.

Till the next TTI bootcamp!

Ultimate Southern Vietnam Guide — 13 Best Things to do in...

Nami Island Day Trip from Seoul: How to Cover the Best...

What It Was Like When a COVID-19 Case Was Confirmed on...