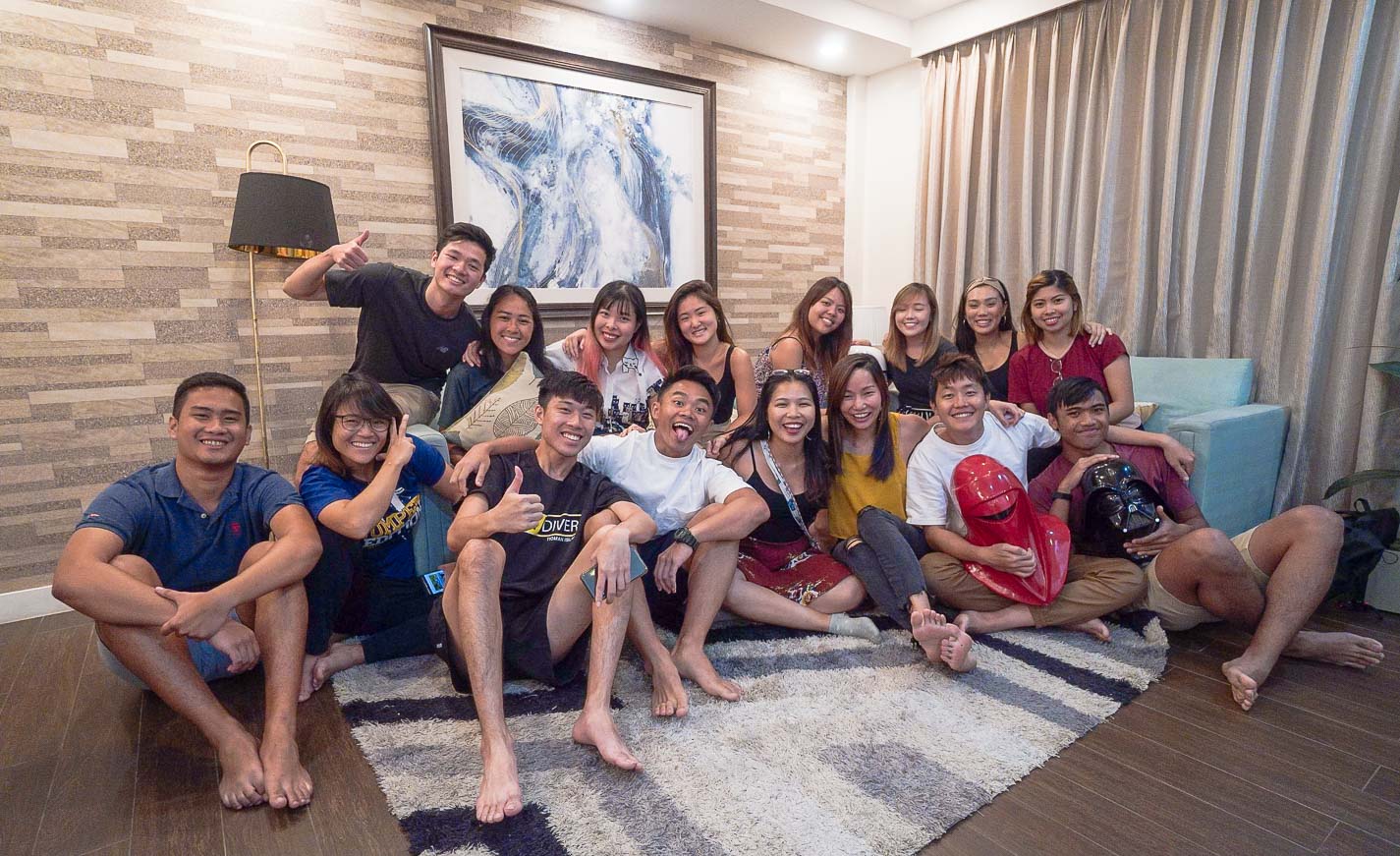 If you’re on this page, you’re probably wondering what it’s like to be in The Travel Intern. Read our other bootcamp articles, and you’ll find out it’s definitely not all rainbows and unicorns!

What to expect: You’ll be thrown out of your comfort zone, inadvertently lack a lot of sleep, make mistakes, and partake in activities that you aren’t so excited to do sometimes.

But you do them anyway.

In any case, you’ll take away experiences from bootcamp that you can’t get anywhere else, remember the moments you’ve shared with your colleagues friends, and live life a little braver and smarter afterward.

T-7: This time around, we had the luxury (or so they said) of having a full week with our mates before bootcamp.

Whether we had one day or five to mentally prepare us of what’s to come, we were still somehow overwhelmed with all the content workshops, briefings and SOPs (standard operating procedures) that were hurled at us.

It wasn’t until day three before we found out where we were going and who we’d be teaming up with for the week!

Two teams would be heading to Palawan Island, and the other two would be in Cebu before all the teams would meet in an Airbnb in Cebu city.

With every trip comes exciting activities like hiking, scuba diving and zip-lining. Some other activities… might make your legs wobble a little. Well, you could say that this bootcamp was all about conquering our fears, because there were definitely some we’ve yet to vanquish.

And with that, we’re off to the Pearl of the Orient Seas! ✈️

Here’s some context: Team Moalboal’s itinerary included canyoneering in Badian, which included cliff jumps that ranged from one up to 15 metres, into ice-cold waters. Huiwen wasn’t exactly looking forward to this, due to her fear of water.

As the team trekked to their first jump of five metres high, Cherie, Kim, Xzar and Sam made the jump like pros.

Huiwen on the other hand, was nervous and scared. On top of that, there was a line of other tourists waiting to jump, adding onto the pressure. After attempting to encourage her to jump, she decided to climb down the rocks instead.

Guides helping Huiwen down the slippery rocks as she was afraid to jump.

Oh wells. Nevertheless, she vowed to make at least one jump throughout the canyoneering journey if there was one a lower one:

After much psyching, Huiwen made a jump of 15cm high! Hurray! It’s still a feat, right?

Jokes aside, kudos to Huiwen for making that jump! Can’t be easy on the first time. Three metres next time, maybe?

Zipline? Sure. In Superman position? Uh…..

Zip-lining for most people is easy game. The excitement of flying through the air amongst the trees makes us feel like free birdies! But what about zip-lining head-first? That sounds like the next level.

Poor Issac was terribly afraid of heights and was made to fly headfirst down a 71-metre zipline in Puerto Princesa. You could imagine his nervousness and *slight* regret coming up here.

He made it though! Good job Issac!

Swimmin’ with the jellyfishes

Well, in Therese’s case, she gained the fear of jellyfish from her snorkelling experience in Palawan.

As part of their El Nido tour, Jingyi and Therese were vlogging while snorkelling on Hidden Beach (because cONTENT comes first).

Therese then felt something brush her elbow with a soft zap. Thinking it was a coral or a part of her life vest, she didn’t mind it that much. It was when she looked down and saw the pink jellyfish one and a half times the size of her hand, she screamed.

Jingyi, who was swimming close to her, heard “jellyfish” and started screaming as well.

While freaking out and in their rush to head back to the boat, another jellyfish stung Therese’s entire arm, causing it to be red. Yikes.

Back on the boat, their guide helped her rinse her arm with water while she groaned in pain.

Needless to say, Therese wanted payback. When she returned to Singapore, she decided to eat jellyfish at a sushi restaurant. Ohhhhhh revenge is sweet and tasty.

Before I joined TTI, I might even have thought bungy jumping was doable. But heck, I thought wrong.

I discovered my fear of free falling when I tried out the GX-5. I don’t usually swear, but falling from a 50 metre swing released more profanities than I use in a year.

Fast forward to our day trip to Bohol when we went cliff jumping at Molave Cove Resort.

Being the only one in the group not having done cliff jumping, I was really excited to give it my first try. Or so I thought.

I grabbed a life vest, took off my footwear and skipped excitedly to the jump point. But as I took my first look down, I took a step back.

Thanks, Aldo, easy for you to say. You’re a certified diver 🙃.

Without any hesitation, Bossman Hendric went straight for it. Leaving me to stumble and start questioning if this was a good idea.

It has already been a full minute since Hendric made is first jump. Whereas…. I stood at the edge for another five minutes, clutching on my life vest, peering down at the calm waves below me. My feet got a little cold.

The thought of free-falling (even at a five-metre height) without being strapped on was scary. YIKES. I understand your fear now, Huiwen.

But with a little patience (and a lot of countdowns), I mustered the courage for that ‘lil leap of faith.

Read also: 10 Once in A Lifetime Experiences in Cebu

Aside from conquering our fear of heights or water, you must have known by now our biggest, common fear:

Chiong Party. If you’re unsure what that is, it’s a 16-hour period of crunch time for us to finish our assigned travel article or video.

Who in the right mind is able to complete a quality piece in that time-frame?!

As our Grabcar turned into our gorgeous three-storey Airbnb, wild thoughts were running through my head.

After a shower and a briefing by UPT, we were left to our own devices.

That was NOT how we looked like at work.

By 12AM, both Cebu teams had ONLY just finished exchanging photos and video and notes.

By 2AM, I had barely just gotten my outline done and my brain was dead. I am definitely not a night person. Leaving my own room, I guiltily hid in another bedroom for a quick shut eye, hoping no one would come in and see me 😬.

I wasn’t alone. Rianna crept into the room afterward, eye bags branded with Prada, dying for some shut-eye. Therese and Sam were fast asleep in their rooms, hoping to gain inspiration from a 20-minute nap.

However, despite the evident lack of sleep and patience during chiong party, everyone was willing to help one another, providing comments or helping fill the content gaps in our articles or videos. And that was the beauty of bootcamp.

Did we make it? Sure. We trudged through hell and back, surviving on an hour’s sleep, ready to present our assignments to our seniors and bosses.

In hindsight, an experience with The Travel Intern allows you do things you may not have imagined yourself to do. You may try something new, make a bunch of questionable life choices, or even face your fears (like looming deadlines).

Either way, if you keep an open mind and just press on, who knows? It may not be that bad after all.

Till next time, see you at the next TTI Bootcamp!

Why I Ditched The Excel Sheet For A Trip Planning App...

15 Things to Do in Singapore for Outdoor-Loving Singaporeans