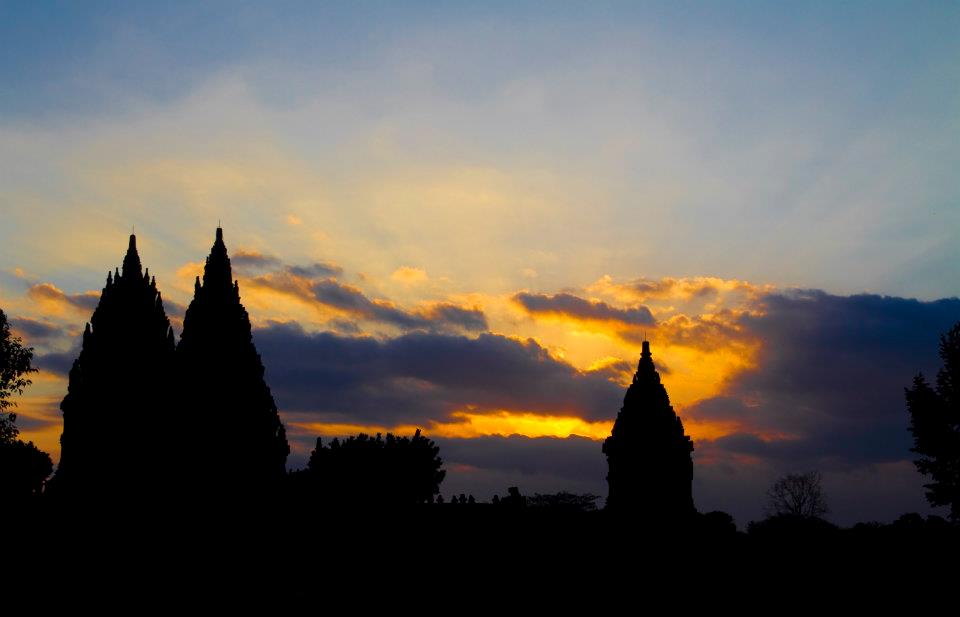 I disembarked from the plane, alone and disoriented, and shuffled my way out of Yogyakarta’s small airport, following the throngs of people streaming out into a sleepy Indonesian afternoon.

Straight ahead were the taxi touts, men who were fast approaching, my bewildered expression a dead giveaway. Tourist, I was sure my eyes said, and I knew they had already found me easy pickings for a marked-up fare.

Then came the clamour of voices: “Taxi? You want taxi, Miss?”

I had encountered this before in many Southeast Asian cities. I was used to it, used to scanning the crowd and going with the driver who looked the least dishonest, all the while feeling slightly disgruntled that I was paying more than the local price, but unable to do anything about it. Except that every other time, I had been with friends or family, never alone. 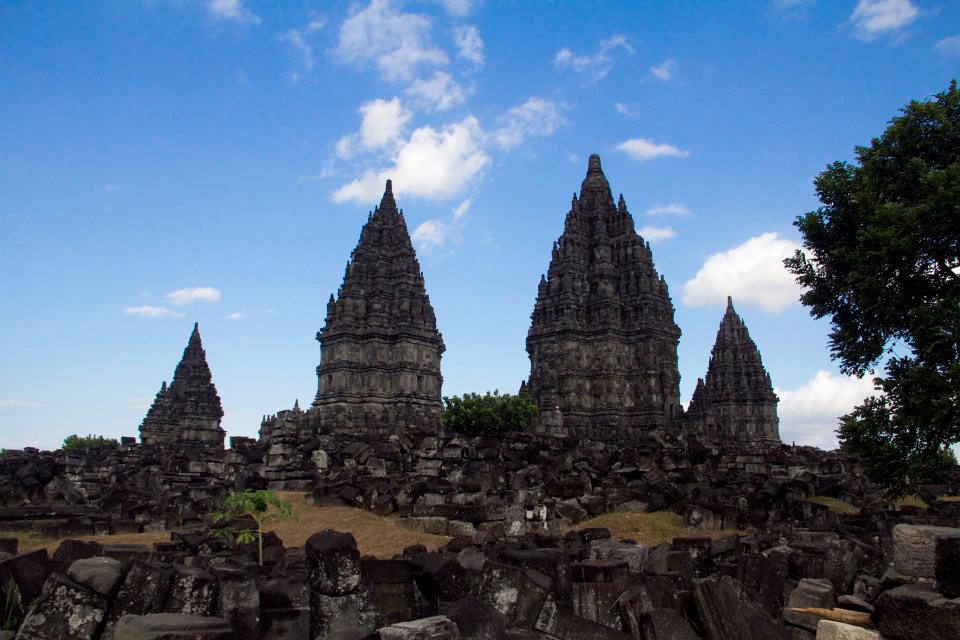 This was my first solo trip abroad, a five-day gander to Yogyakarta in 2012, when I was 22. It was my last summer break before final year of university, and I was haunted by the notion of time running out.

Lecturers and seniors routinely reminded us that these were the best years of our lives. These were years we should live it up and travel and make memories that our older selves, chained to office cubicles and full-time employment, could look back upon with nostalgia and pride. The summer was ending, and though I had recently spent two weeks on a road trip in Perth, I was restless.

I wanted to see more of the world, but there was nobody available to see it with me. So I decided to go alone, picking Yogya because it was near enough to be manageable, and touristy enough to not be scary. In the world of solo travel, I was dipping my toe into the proverbial ocean, testing the water before I would plunge in headfirst in the years to come.

Still, planning that trip was more complicated than usual. How would I convince my parents that this was a legitimate pursuit for their only child? And once I was soothing their fears, how was I to quell my own anxiety about the trip? What if I got lost, stalked, ill, robbed? What if I hated it?

Recently I attended a talk on solo female traveling, where four women – Lucinda Law, Carlyn Law, Vivien Lee and June Ismail –  shared their stories about travelling alone. Carlyn Law had gotten out of an abusive relationship when she went to Italy to volunteer on organic farms; June Ismail spent New Year’s in Sapa, Vietnam after her sixteen-year marriage ended. For all of them, and many others I would meet on the road, heartbreak was a catalyst to pack their bags and go.

I was lucky, that first trip – I left with the full support of my then-boyfriend, who reassured me many times that I would be more than fine, and if he was worried about me he never let on. Perhaps he knew, before I did, that I needed to prove to myself I could be okay in a foreign land.

When he sent me off at the airport I was still nervous. “Just go,” he said, “If you really don’t like it you don’t have to do it again, and if you want to come home early I’ll buy you a ticket back.”

I had so many safety nets; all I had left to do was get on that plane.

A taxi to Edu Hostel Jogja where I was staying would have cost approximately six dollars; the price of the train was a few cents (and, as I would later learn, heaps of patience). With no schedule to follow and the rest of the day ahead, I chose the latter, turning left towards the train station.

It was only after I bought a ticket and settled down by the tracks to wait did I realise there was only one other passenger waiting with me. Where was everyone?

I asked at the ticket counter and learnt that the next train was in 50 minutes time. 50?  Did I hear that correctly? Ten MRT trains could come and go in that time, screamed my Singaporean brain, spoilt by the efficiency of my city.

But I had no travel partner to turn and complain to, so instead I pulled out the red notebook I had brought. I intended to spill my unhappiness on the page, but once I started writing, I realised there were better things to record than dissatisfaction. 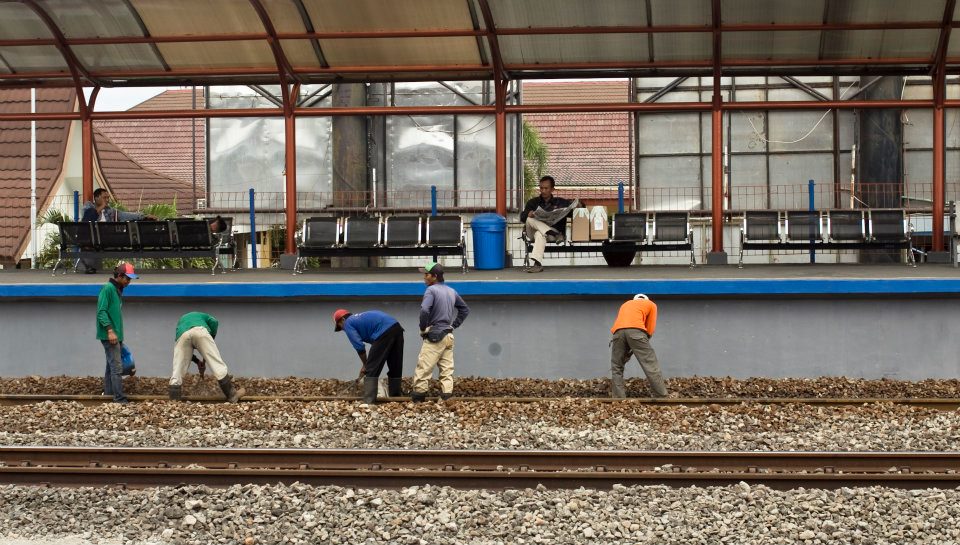 Across the tracks a group of five men transferred stones from one rail to another. They made no hurry of the job, alternating work and rest, as though life was one extended smoke break. This was to be my first clue about the city.

After checking in I wandered down the street looking for lunch, a map in one hand and a copy of Lonely Planet in the other, well aware that it made me look like a tourist, but unable to navigate on my own.

Barely two minutes later I was being followed by a man on a motorbike, honking as he approached. “Miss, where you going, Miss?” he called out repeatedly, slowing down and pulling over to the kerb even as I quickened my step to try and outpace him.

In Lonely Planet’s Best Ever Travel Tips, journalist Frances Linzee Gordon advises solo female travelers to size up strangers within the first three seconds of meeting them, and then going with that impression. “A woman’s gut instinct often serves as her best protection,” she writes.

That first trip, though, my traveller’s gut was ill-developed, and everyone seemed like a threat. I stepped into the shade of a provision shop to decipher my map in peace. Then, once I had figured out a route, an old man came up beside me, held up one hand to halt traffic, and led me across the road.

Once across, I scurried onto the kerb holding my bag tightly, fearful that he might ask for tips, still suspicious of everyone’s intentions. But he stepped away from me and melted back across the road, gone before I could even raise a hand in thanks.

In travel, as in life: You try not to let the dodgy characters colour your opinion of the good ones. But sometimes they still do.

I did everything on the tourist circuit – Booked a sunrise tour to Borobodur temple and a sunset one to Prambanan, took a cooking class, got a massage, and spent hours reading and writing at fan-cooled two-storey cafes recommended by my trusty copy of Lonely Planet. 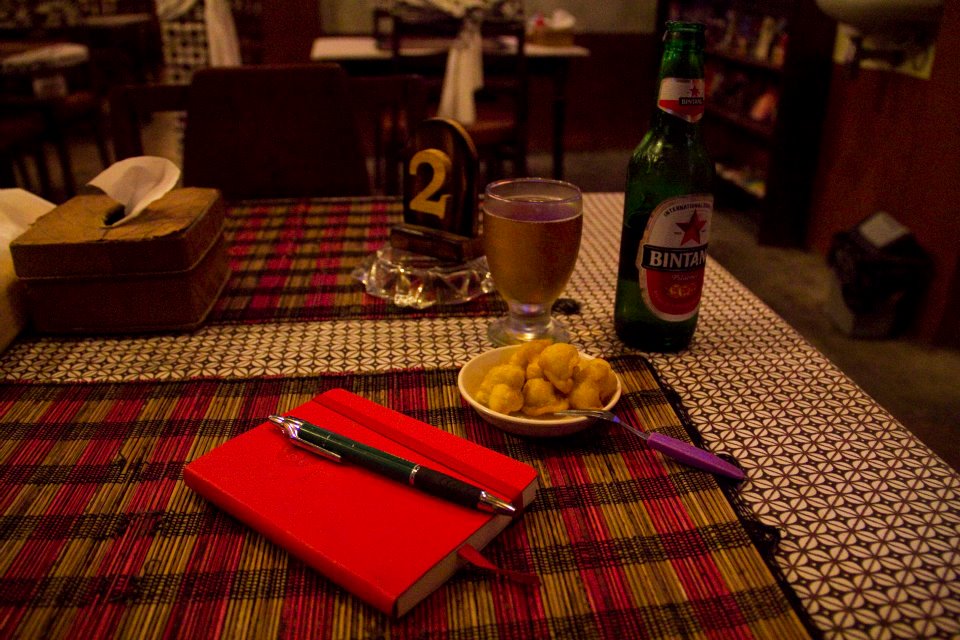 Everything became a bit more challenging because I was alone. There was no one to hold my bag when I went to the toilet, and I had to persuade tour operators to fit me into existing groups because the cost for one person was exorbitant.

At Borobodur, groups of students on school excursions whooped and catcalled as I walked past, and I was glad my eyes were hidden behind shades and they couldn’t see how unnerved I was.

On the temple structures, yet more groups of students (older ones this time) were out in full force, looking for foreigners to practice speaking English with. I talked to a group of three as they ran down a list of questions – Did I like Yogyakarta? What was my favourite food here? Where was I from? What is Singapore like?  – while their teacher surreptitiously (or so he thought) snapped photos. His photo taking became more enthusiastic when the students taught me a traditional dance, complete with twirly peacock fingers. 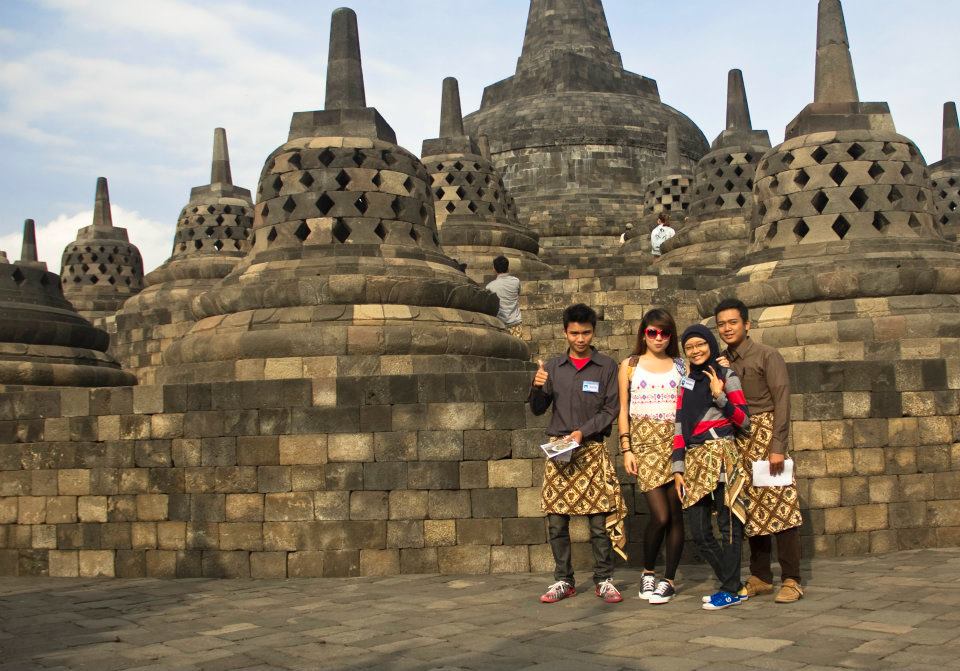 The students added me on Facebook, and over the years they would strike up conversations with my from time to time. Later I found out that one of the male students in our trio had joined the Indonesian Navy. I guess that forged some connection between us while I was still with the Republic of Singapore Navy.

Other women I met made me feel less fearful. There was Jiwon from Korea, who rode around alone on a motorcycle; Chechi from Switzerland who had gotten out of a ten-year relationship and was on the road for eleven months now; Amy, Katarina, Amanda – people I recall because I wrote about them in my travel journal, before the names and faces from subsequent trips became too numerous to note down.

When I look back I don’t always recall the things I did in Yogya. Mostly I think about how I felt. How it felt to leave Singapore on my own, to journal every night, to slowly stop wishing I had a friend with me. To realise I liked this sort of traveling, that I could keep doing this.

After that my solo ventures grew longer and bolder. I’ve been called brave by multiple friends who tell me they can’t imagine traveling in the same way. I always tell them, in the beginning I was scared too, and it’s okay if they are. And then I add: “Just go. If you really don’t like it you never have to do it again.”

10 Essential Apps for Travelling in China